The Mig-21 survived long enough to be in service with two NATO militaries. It seems likely to serve for at least 70 years after its initial introduction and possibly longer.

Initial suitability studies for the MiG-21 began in 1953. The success of the MiG-15 and MiG-17 suggested that Soviet aerospace engineers could compete with their Western counterparts, and with the MiG-19 the Soviets had their first supersonic fighter. However, technology changed so quickly in the first two decades of jet flight that the fighters that had dominated the Korean wᴀʀ were effectively obsolete by the mid-1950s. MiG-15s could cut apart a formation of B-29s, but couldn’t even catch modern American bombers. The Soviets intended the MiG-21 to change that, while also providing an effective air superiority option. 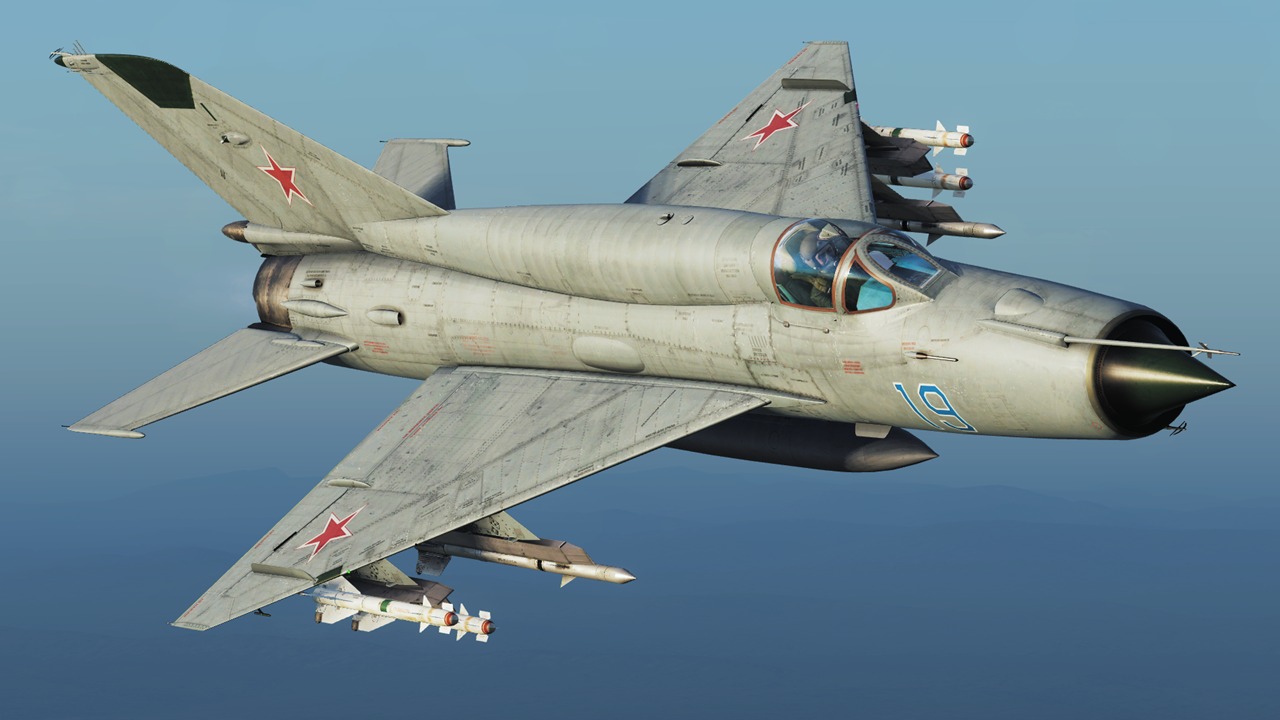 The MiG-21 (eventually dubbed “Fishbed” by NATO) would exceed Mach 2.0, with an internal cannon and the capacity to carry between two and six missiles (the Fishbed actually preceded the missiles into service). Like most fighters the MiG-21 would eventually serve in a ground attack role, in which it can carry a limited number of bombs and rockets. As with many of their fighters, the Soviets preferred to operate the MiG-21 from ground control, eliminating the need for bulky, sophisticated radar equipment.

Altogether, the USSR would build 10,645 Fishbeds between 1959 and 1985. India would construct another 657 under a licensing and technology transfer agreement with Moscow, while Czechoslovakia built 194 under license. Under complicated and somewhat dubious circumstances, the People’s Republic of China acquired sufficient aircraft and technical documents to reverse engineer the MiG-21 into the Chengdu J-7/F-7. China produced around 2,400 Fishbeds between 1966 and 2013. The combined numbers make the Fishbed by far the most produced supersonic aircraft in world history. 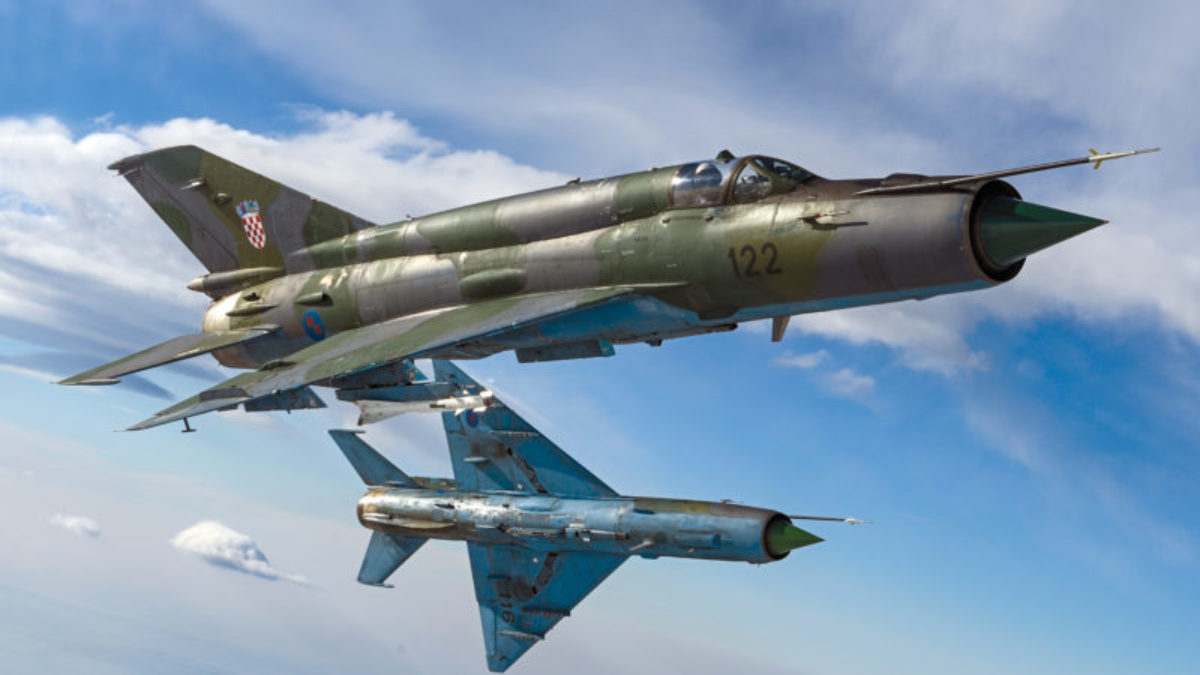 With the MiG-21, engineers sorted through a set of basic problems that future research could not substantially improve upon. Modern fighters don’t fly much faster than the MiG-21 or maneuver much more capably. While they do carry more ordnance and have more sophisticated electronic equipment, many air forces can treat these as luxuries; they simply want a cheap, fast, easy-to-maintain aircraft that can patrol airspace and occasionally drop a few bombs. The Fishbed fits the bill. 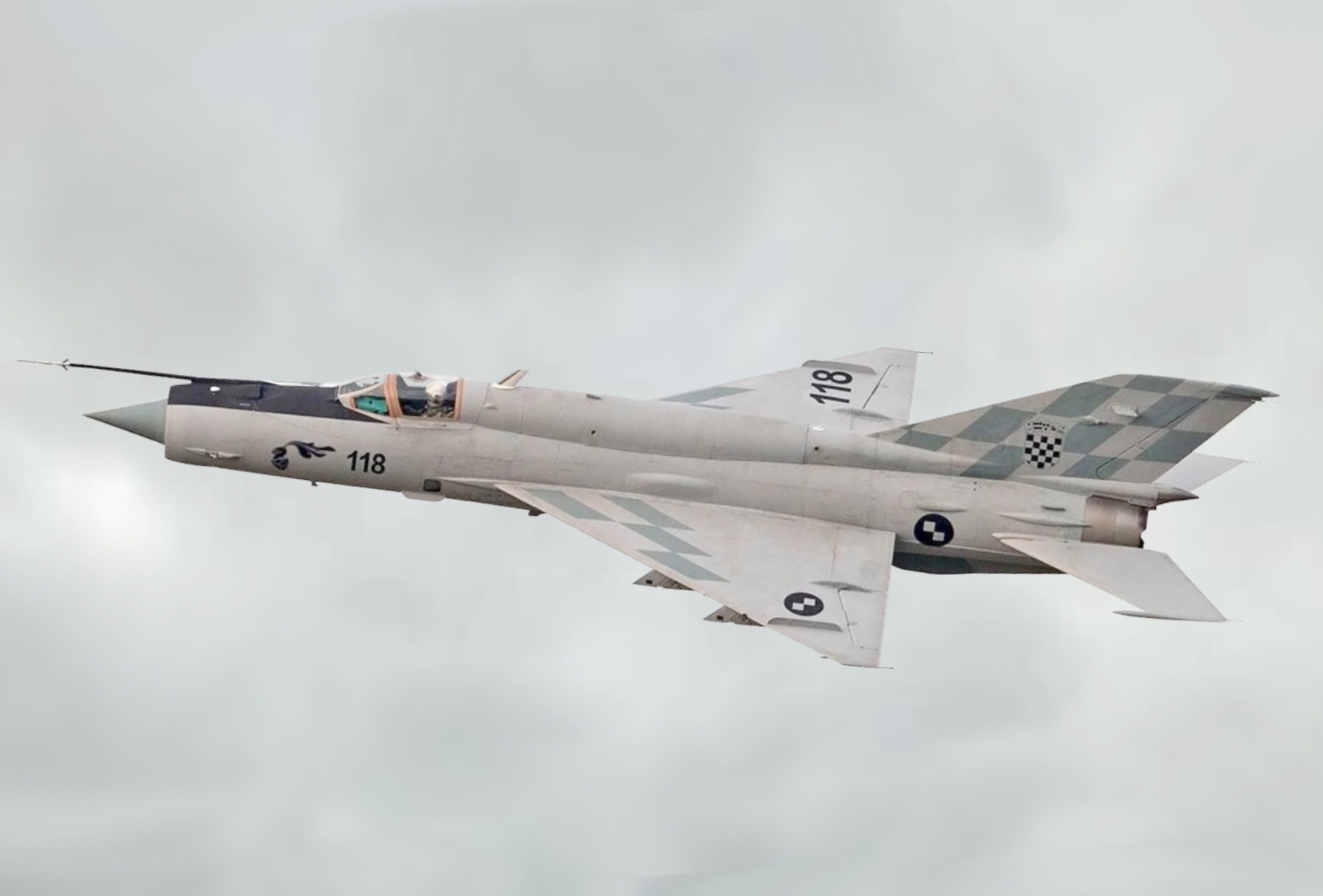 To be sure, the Fishbed would not have been a particularly useful fighter in Western service. It has short legs, cannot carry a great deal of ordnance and lacks the space for sophisticated electronic equipment. The shape of its cockpit limits pilot awᴀʀeness. However, it aptly fulfilled the Soviet need for a ground control intercept fighter that could fly and fight over the battlefields of Western Europe, as well as act in a limited interceptor role.

During the Cold wᴀʀ, the United States came into possession of a number of MiG-21 variants (eventually purchasing a squadron of J-7s from China). Generally speaking, American pilots spoke well of the plane, and it performed more than adequately in aggressor training situations. Indeed, highly trained American pilots probably pushed the MiG-21 farther than most Soviet pilots could have done.

The MiG-21 never saw combat on the Central Front in a NATO-Wᴀʀsaw Pact wᴀʀ, but it certainly has seen its share of action.

In Vietnam, pencil-thin MiG-21s found that they could take advantage of American rules of engagement by using their size and speed to cut through bomber packages before U.S. fighter jets could visually identify and target them. The size and maneuverability of the Fishbed also allowed them to evade early air-to-air missiles. After attacking, the MiGs would run for home. 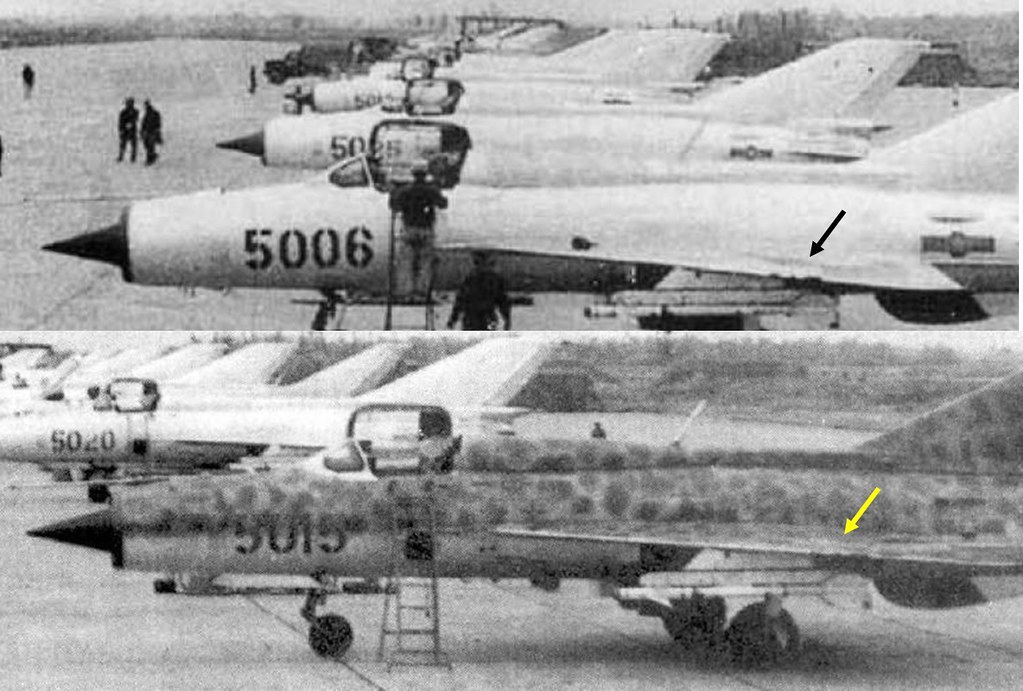 One exception to this pattern came on January 2, 1967, when a group of F-4 Phantom IIs under the command of legendary pilot Robin Olds tricked North Vietnamese commanders into a disastrous engagement. The Phantoms shot down seven Fishbeds that day, including one flown by Nguyen Van Coc, who would survive the crash and accumulate nine κιʟʟs over the rest of the wᴀʀ. This would mark Nguyen as the most successful Fishbed pilot of all time, although several other Vietnamese and several Syrian pilots would achieve ace distinction while flying the MiG-21. 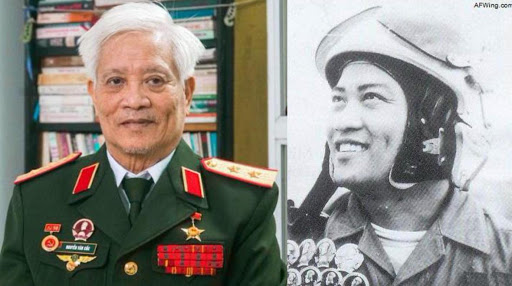 The MiG-21 saw extensive service in wᴀʀs across the Middle East. The fighter-bombers of the Israeli Defense Force devastated Egyptian and Syrian Fishbeds in the opening strikes of the Six-Day wᴀʀ. Fishbeds fought Israeli fighters in the wᴀʀ of Attrition, the Yom Kippur wᴀʀ and the Lebanon wᴀʀ, generally suffering badly at the hands of outstanding Israeli pilots. In one case, Israeli fighters ambushed and destroyed several MiG-21s flown by Soviet pilots.

The success of Western aircraft against the Fishbed in the Middle East, as well as in Angola, caused many to conclude that Soviet fighters were outclassed by their Western counterparts. However, pilot training issues make comparison difficult. The MiG-21 performed more than adequately in comparable pilot training contexts. For example, Indian MiG-21s flew in the 1965 Indo-Pakistani wᴀʀ and achieved κιʟʟs in the 1971 wᴀʀ and the Kargil wᴀʀ. Fishbeds also acquitted themselves well in air combat in the Iran-Iraq wᴀʀ. 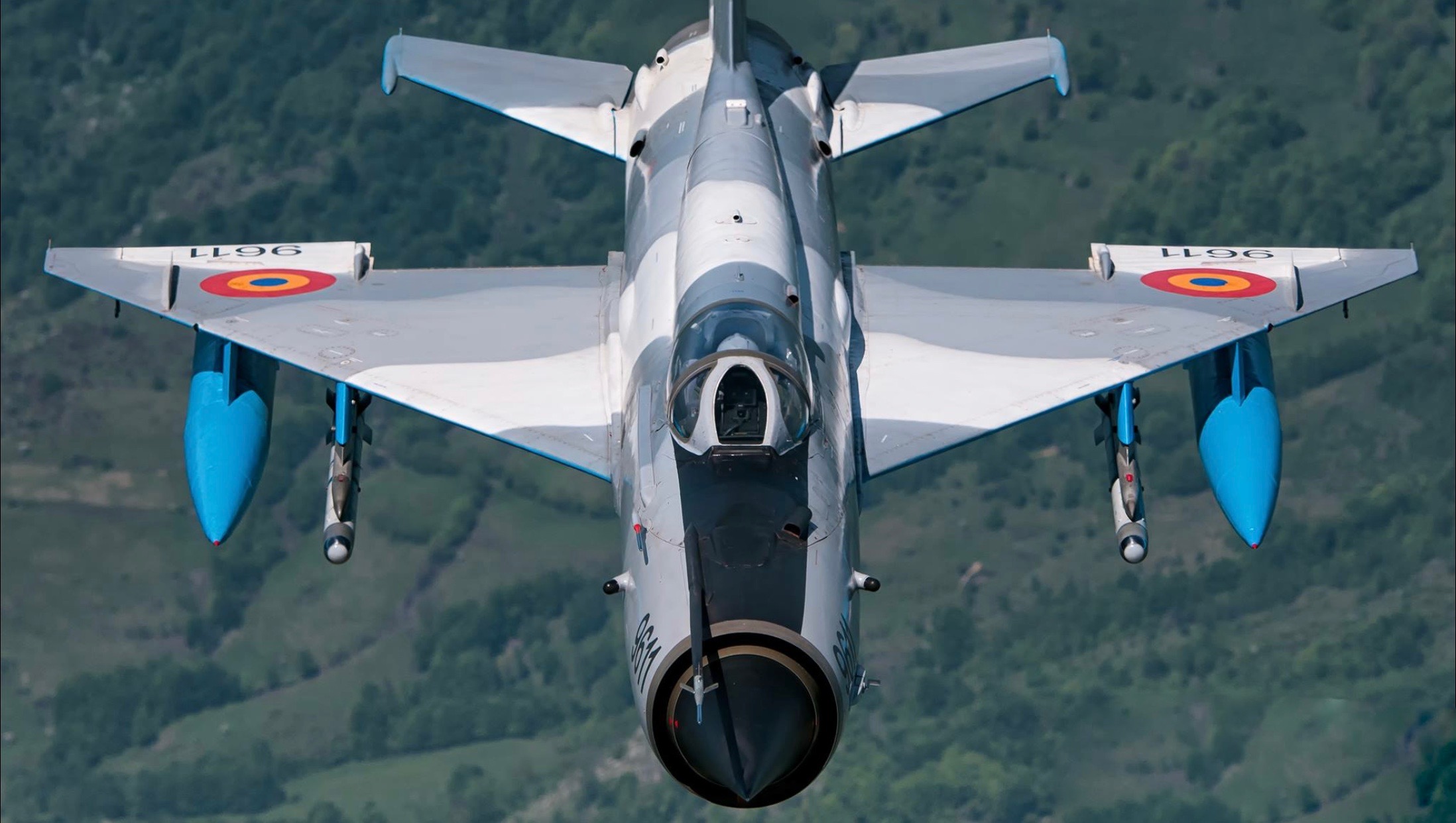 The number of operational MiG-21s began declining in the late 1980s and 1990s, as more modern models replaced them in front-line service, and after the collapse of the Soviet Union led to the dramatic reduction of Russian strength. Soviet client states felt the pinch as well, and could no longer keep their aircraft in service. However, numerous air forces continue to use the MiG-21 and its Chinese variants.

The MiG-21 currently serves in eighteen air forces worldwide, including two members of NATO (Romania and Croatia). Fishbeds flew in about forty other air forces (counting is difficult because sometimes countries ceased to exist before the MiGs that served them) since 1960. The J/F-7 serves another thirteen countries and has been retired by four. China, Russia, and Ukraine still carry out maintenance and update work on existing aircraft. The advent of 3D printing may make it even easier for current operators to keep their Fishbeds in service, as they can produce spares and upgrades in-country. 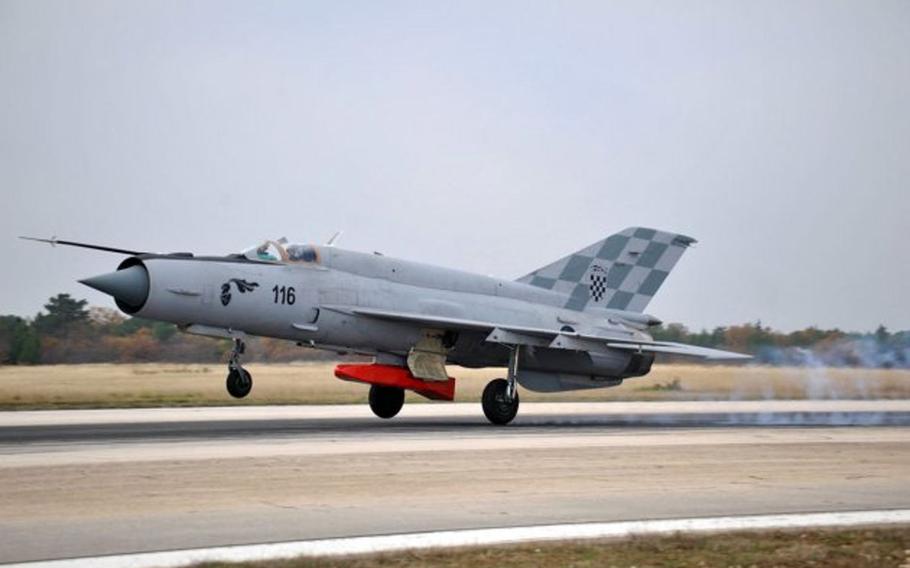 Few of the Fishbeds in service today bear much resemblance to the fighter that rolled off the line in 1959. They carry different, far more sophisticated weapons, including the R-60 AAM, the Magic 2 and the Python III. This makes them far more lethal than their older cousins. Moreover, upgrades to their electronics have improved their radar and communications equipment, and have made possible the delivery of precision-guided munitions. 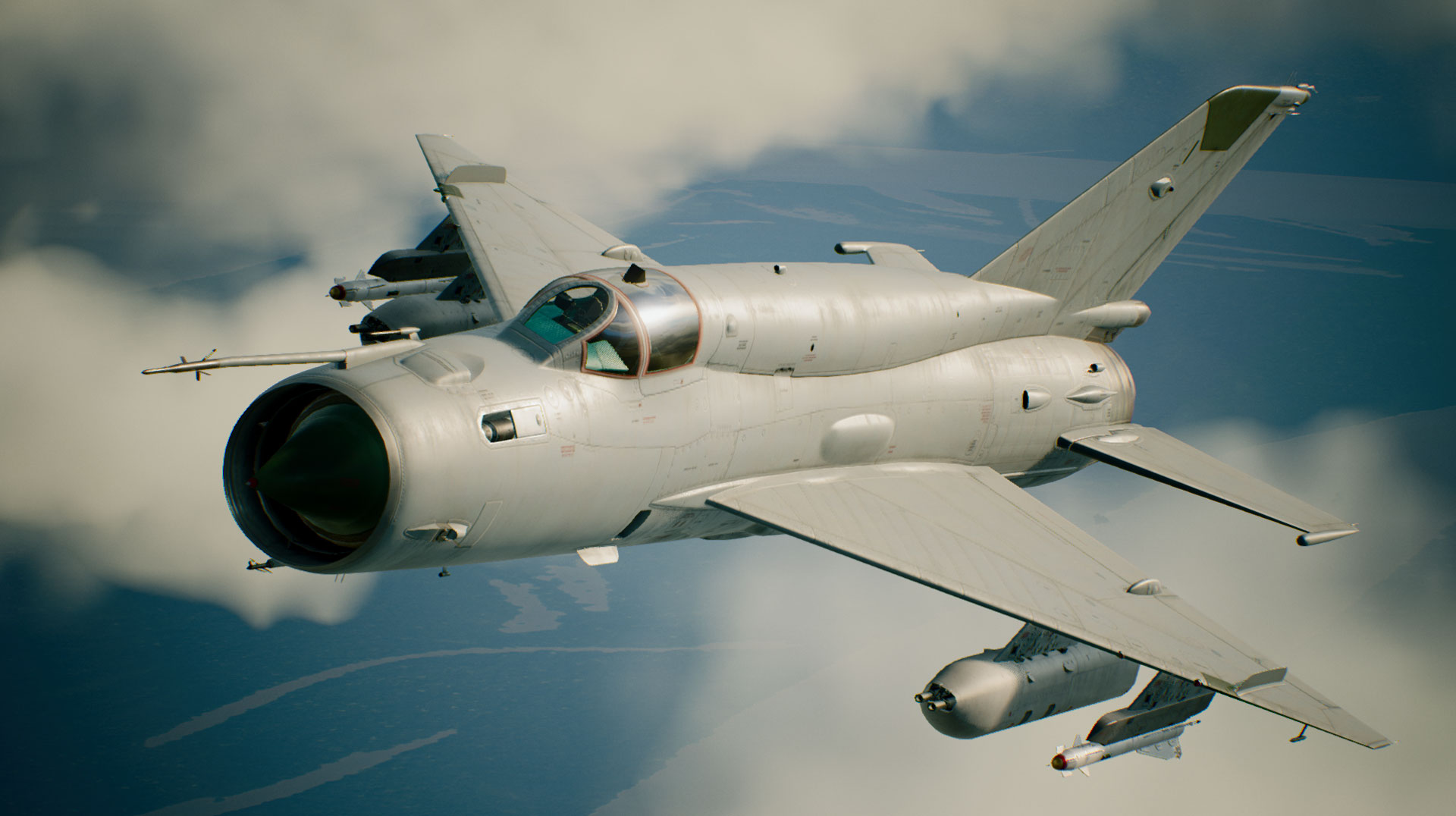 China has ended production on the J-7, meaning that we have seen the last MiG-21 variant roll the assembly line. Croatia and Romania will dispose of their Fishbeds in the next five years. After a spate of accidents, India is finally retiring its MiG-21s (assuming it can ever actually acquire or produce a replacement). Chinese J-7s have been relegated to local defense and training duties.

This hardly means the end of the Fishbed, however. Many of the J-7 and F-7 models remain of fairly recent vintage and can stay in service for quite some time. Bangladesh acquired the last dozen F-7s in 2013, and won’t need a replacement anytime soon. And plenty of air forces simply have no requirement for anything much more sophisticated or expensive than a Fishbed. There may never be a hundred-year fighter (although the B-52 may quite possibly reach that number before final retirement). The MiG-21 will easily reach sixty, however, and probably seventy without breaking a sweat. It remains one of the iconic fighters of the supersonic age.